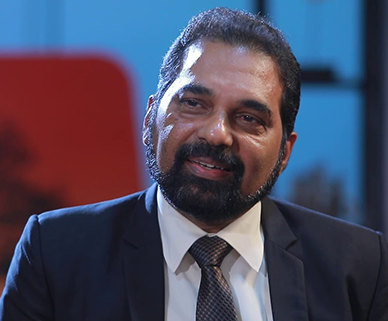 Senior Prof. Sudantha Liyanage an evolutionary thinker, a dynamic personality and one of the most experienced and estute administrator in the University system was appointed as Vice-Chancellor of the University of Sri Jayewrdenepura by His Excellency the President and assumed duties as the Vice-Chancellor on the 09th of September 2020.

Thereby, his commitment to the development of the country goes beyond his services to the University and education. He is a key member of the Presidential Task Force since December 2019 and has provided significant input to develop the electoral system of the country in 2009.

He has also been recently appointed on a national level to aid in the development of Chemical industries in Sri Lanka. His experience in the scope of education which spans over 30 years has resulted in him being appointed as the Chairman of the Education board of the National Institute of Education.

Prof. Liyanage, has over 50 research papers and articles to his name published in high-ranking national and international journals with an H-index of 6. He has authored several, books monographs and essays. His views on nationally important matters have been featured in over 50 newspaper articles.

As a person that has a high media profile Prof. Liyanage remains a key influencer in Sri Lanka ever committed to the task of building and developing our mother nation. He continues to be a key personality featured in various media, often teaching and at times sharing his vast knowledge in various interest areas that are nationally relevant.

Being an avid researcher Prof. Liyanage had a keen interst of developing the research of the Faculty of Applied Sciences. During his tenure as the Dean, he took measures to develop research in the Faculty, as a result, the Research output increased by 300%

The new Instrument Facility which was a brain-child of Prof. Liyanage is one of the best in the country. Fully equipped with cutting-edge equipment, the facility has attracted the interest of foreign Universities.

Prof. Liyanage, is a person of great vision and efficiency. He was appointed as the ActingVice-Chancellor at the University of Sri Jayewardenepura at a crucial time in January 2020. He has since faced many issues with grace and provided feasible solutions.

He was an admirable leader in taking charge of the University Activities during the ongoing COVID-19 pandemic, he did not let work of the university be crippled and he charged through with the intention of developing the University and aiding the nation.

Senior Professor Sudantha Liyanage with his appointment as the Vice-Chancellor has many projects in the pipeline such as the establishment of an auditorium with 2500 seating capacity and a state-of-the art gymnasium. Having the students best interests at heart Professor Liyanage has taken initiative to establish 2 hostels through a bank loan.

Out of the many projects that the University will relize in the coming years the establishment of the faculty complex of the Faculty of Engineering will be a much awaited milestone. Prof. Liyanage has taken measures to expedite the process.

Professor Liyanage he will no doubt lead the university towards a new era of development and help the university become a pinnacle of success both nationally and internationally.