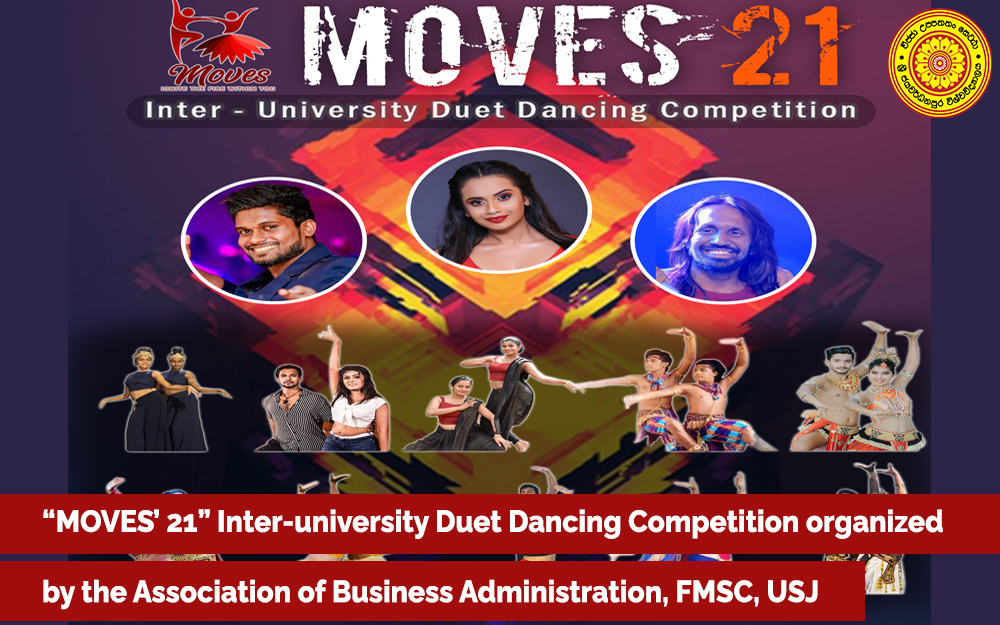 Moves’21, the first ever Inter-university Duet Dancing Competition, organized by the Association of Business Administration of the Faculty of Management Studies and Commerce, University of Sri Jayewardenepura, was aimed at breaking through the monotonous virtual lifestyles while providing them with a platform to showcase their aesthetic skills . It was concluded successfully on 30th of October 2021.

Hundreds of passionate individuals from state universities all across the island applied for the competition. Out of them the 10 most talented duets were selected by our respective panel of judges as the Top 10 finalists of Moves’21. Mr. Baskar Prakash, Miss Aseka Wijewardene and Mr. Gayan Srimal consisted of the respective panel of judges who carried out all the evaluations throughout the competition.

With respect to the health restrictions prevailed in the country, the grand finale of Moves’21 was held on a virtual platform on 30th October 2021. The occasion was officially hosted in the presence of Dr. Kalyani Karyapperuma, the Head of the Department of Business Administration along with hundreds of participants joining the event via Zoom and Facebook Live broadcast.

Ms. Suwidinee Maheshika and Mr. Vimukthi Roshan from the University of the Visual and Performing Arts who were awarded as the runners up were also the Most Popular Duet of Moves’21 which was selected based of the votes received for the respective dancing videos on our official YouTube Channel.

KL.LK was the platinum sponsor of Moves’21 and Kapruka.lk was the gold sponsor while many other gift partners joined hands throughout the competition to make Moves’21 a success.