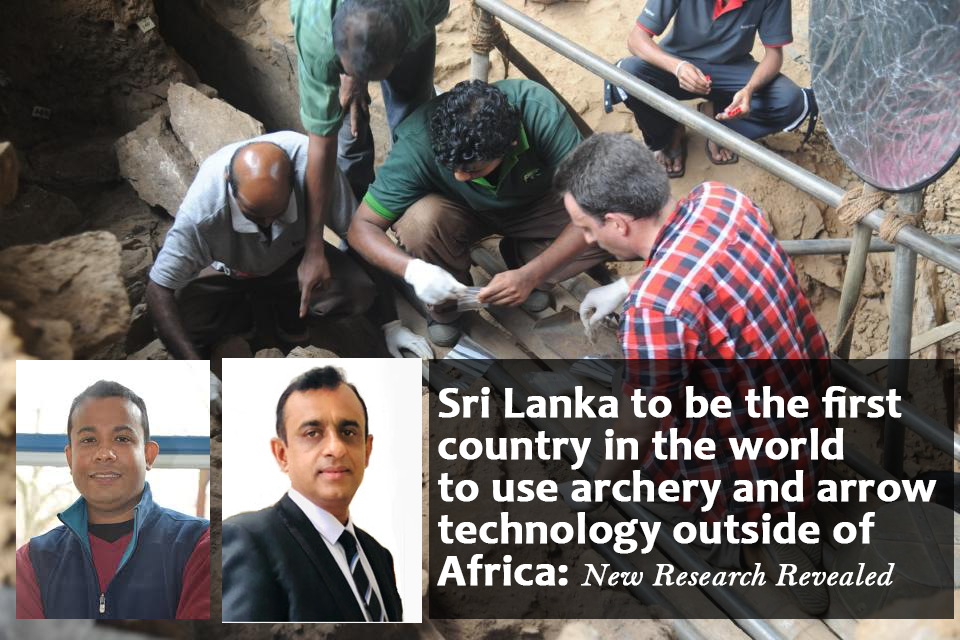 The story of humanity began in Africa. From there, early humans spread to other continents (an idea known as the “Out of Africa” hypothesis) and eventually became the global species that we are today.

Many archaeologists speculate that our ancestors traveled along the coast to avoid challenging environments like tropical rainforests. But, according to a new study, that might not be giving our ancestors enough credit.

Archaeological findings of a new study conducted by a team of researchers including Mr. Oshan Wedage of the Department of History and Archaeology, and Prof. M. M. Pathmalal of the Department of Zoology have revealed that 48,000 years ago, indigenous people in Sri Lanka used bones of hunted animals to produce hunting tools and equipment. The bone tools and artifacts analyzed in this study were selected from the faunal assemblages recovered during the 2009 to 2012 excavations of Fa-Hien Lena, Sri Lanka. As the site of the earliest fossil appearance of Homo sapiens in South Asia, Fa-Hien Lena cave in southwestern Sri Lanka is a crucial locale for understanding the adaptive capacities and cultural flexibility that humans required as they first moved throughout the diverse environments of Asia.

The findings also indicated that Sri Lanka was the first country in the world to use archery technology (bows and arrows) outside of Africa. According to the results of the research published in the scientific publication of the Journal, Science Advances, Sri Lankans have also been using weaving tools for the same period. Researchers found evidence for the earliest use of bow-and-arrow technology a diverse toolkit of bone and tooth tools indicating the manufacture of plant- and hide-based items that may represent some of the earliest clothing or nets in a tropical setting, alongside a complex array of symbolic artifacts. According to the study, Indigenous people have been using these instruments to hunt fast moving animals such as monkeys and squirrels in the rain-forests. The team unearthed over 130 bone tools from the Fa-Hien Lena cave in modern day Sri Lanka. Many of the tools had been carved into one or two sharpened points – like arrowheads or the tip of a dart. Some were more geometric in shape and may have been used as harpoon tips or in fishing snares. These tools excavated from the cave support the suggestion that early humans may have created specialized tools to help them survive in such a harsh place.

Lastly, the team excavated several beads and other ancient jewelry pieces. People may have worn these items as personal decoration to signal some type of social status. Some of the beads the team found in the cave – which is far inland – were made of seashells. The rain forest group probably obtained these treasures by trading with a group living on the coast, the researchers speculate, suggesting that groups of early humans living in Asia during the Paleolithic interacted in social networks. The discovery in Sri Lanka shows that, when it came to creating tools and learning to live in new environments, our species was uniquely flexible compared to other ancient hominids.