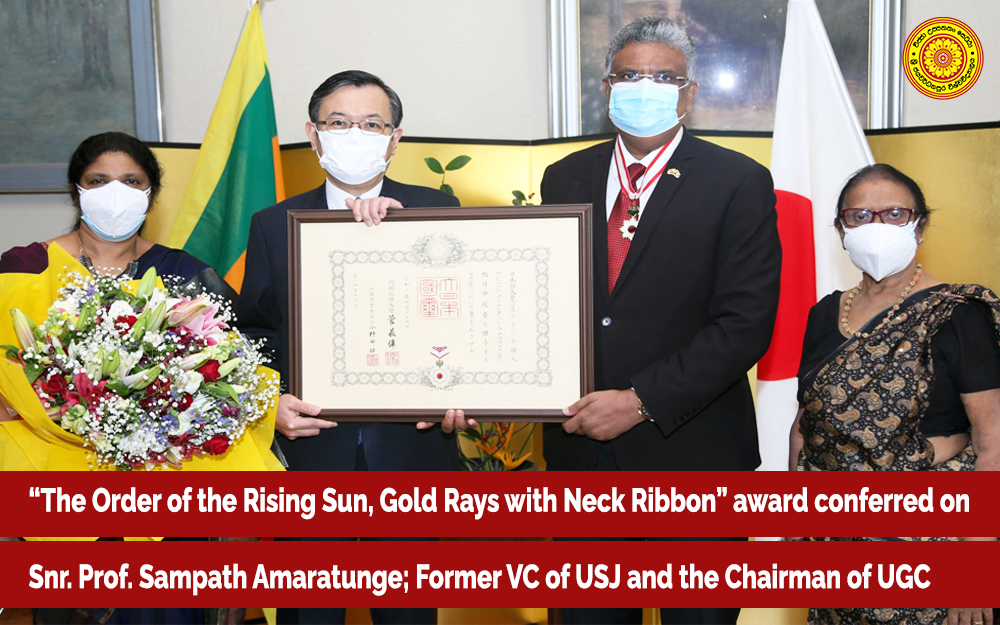 A ceremony to confer “The Order of the Rising Sun, Gold Rays with Neck Ribbon” award on Senior Professor Sampath Amaratunge; former vice chancellor of University of Sri Jayewardenepura and the Chairman of the University Grants Commission, was held on 14th of October 2021, at the official residence of Ambassador SUGIYAMA Akira.

Snr. Prof. Sampath Amaratunge has long been an advocate to the Japanese Culture having lived many of his crucial years in Japan completing his further education. Snr. Prof. Amaratunge is a renowned scholar who has been working closely with Japan for many decades, having gained his MSc. in Economics of Rural Development from Saga National University and PhD from Kagoshima University in Japan, Snr. Prof. Amaratunge who is proficient in Japanese language has always maintained an intimate relationship with the country.

Snr. Prof. Amaratunge, has promoted academic exchanges between the two countries to a new height. For example, during his tenure as the Vice Chancellor of the University of Sri Jayewardenepura, Snr. Prof. Amaratunge founded the Faculty of Technology, which, through close collaborations with numerous universities in Japan, has contributed to advancing technological and scientific studies at the said university. The partnership with the National Institute of Advanced Industrial Science in Japan, which was carefully cultivated by Snr. Prof. Amaratunge, has also promoted the university’s technical competencies in the relevant areas.

Further, Snr. Professor Amaratunge, as Chairman of the University Grants Commission, established Sri Lanka’s first City University modelled on the Japanese higher education system. This innovative concept has enabled aspirant students to gain access to higher studies and pursue their dreams, while effectively consolidating the foundation of the educational system in Sri Lanka. Snr. Professor Amaratunge envisages to expand the concept of City University across the island in the coming days.

As an active member of the Bunka Awards Committee of the Japan-Sri Lanka Friendship Cultural Fund, Snr. Professor Amaratunge has been contributing to promoting cultural activities in Sri Lanka, thus strengthening friendly ties between Japan and Sri Lanka.

“The Order of the Rising Sun” is the highest order conferred by the Government of Japan, in the name of His Majesty the Emperor, on individuals who have made distinguished achievements in the international relations, promotion of Japanese culture, among others.

USJ Congratulates Snr. Prof. Sampath Amaratunge for receiving “The Order of the Rising Sun” award of the Emperor of Japan and the University of Sri Jayewardenepura wishes him all the best for all his future endeavors.