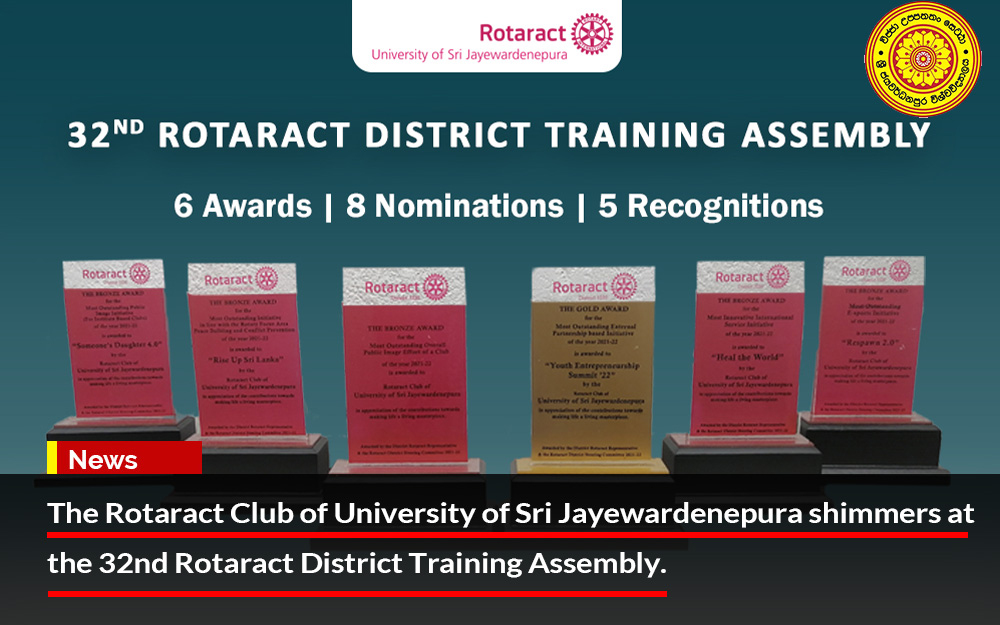 Marking another milestone in its 11th year of service, Rotaract Club of University of Sri Jayewardenepura was able to leave a sparkling impression at the 32nd Rotaract District Training Assembly by securing numerous awards and receiving recognition for the outstanding service rendered to the community. Being one of the largest clubs in the Rotaract District RID 3220, the club was able to create a platform for all aspiring young individuals to serve their community while showcasing their exceptional leadership and skills. It was evident at this year’s District Training Assembly that the undergraduates at the University of Sri Jayewardenepura not only excel in their studies but also in diversified areas.

The Rotaract District Assembly which is held annually is a platform for all Rotaractors to gather in one place and mark the beginning of another impactful Rotaract year, where a new District Rotaract Representative will take the wheel to guide the Rotaract clubs of RID 3220. On this day, the clubs are evaluated based on their performance and are given awards and recognitions for their performance during the year. Under the theme, “ Serve to change lives”, the 32nd Rotaract District Training Assembly was commenced. After a series of colourful events and presenting the Secretary’s Report for the year 21-22 by the Rotaract District Secretary, Rtr. PP Thisura Ramanayake; District Rotaract Representative Rtn. Rtr. PP Akhila Wijetunga signed out by delivering the most awaited speech in the evening and handed over the baton to the new District Rotaract Representative Rtn. Rtr. PP Ahamed Hussain. He elaborated on the theme for his year, “Learn Serve and Strive” and emphasized the importance of equal treatment and opportunities for everyone within the society.

Indeed, the day added much joy and colour to the Rotaract Club of University of Sri Jayewardenepura, as the club’s very own Past President Rtn. Rtr. Vidushith Jayasundara was appointed as the Treasurer of the Rotary International District 3220 for the year 2022- 23. Further, Rtr. PP Praneeth Madusanka, former Vice President of the club, was appointed as the Joint Director of Public Relations for the year 2022-23.

Altogether, the club received six awards, five recognitions and eight nominations. It is with great pride and humility the club announces the recognitions and awards received at the 32nd Rotaract District Training Assembly. The club received the Rotaract District Citation for the year 2021-22 under the gold category. Also, the club was recognized for hosting District projects, the 31st Rotaract District Assembly and Hey Day. Rtr. Rukshini Gomis, the Secretary of RACUSJ was recognized as the “Secretary of the Month (June)” while Rtr. Bhagya Ranasinghe, Sergeant-At-Arms, was given the recognition as the “Spirit of Service”. Additionally, “Media Unit Recognitions” were presented to Rtr. Kithmini Nirasha and Rtr. Sewmini Bandaranayaka.
The club was able to receive the following awards, proving how effective teamwork can bring dreams to reality.

In addition, the club was nominated for the following awards.

These achievements would not have become possible if not for the massive support and guidance rendered by the university administration, the members of the District Steering Committee, sponsoring Rotary Club, the members of the Rotaract Club of University of Sri Jayewardenepura and all the individuals who were continuously there with us in each and every step we took. As a youth-led volunteer movement, Rotaract Club of University of Sri Jayewardenepura strives forward with great aspirations to embark on a journey in creating a safe and better world for everyone to live in by taking actions to sustain life on earth through unity.