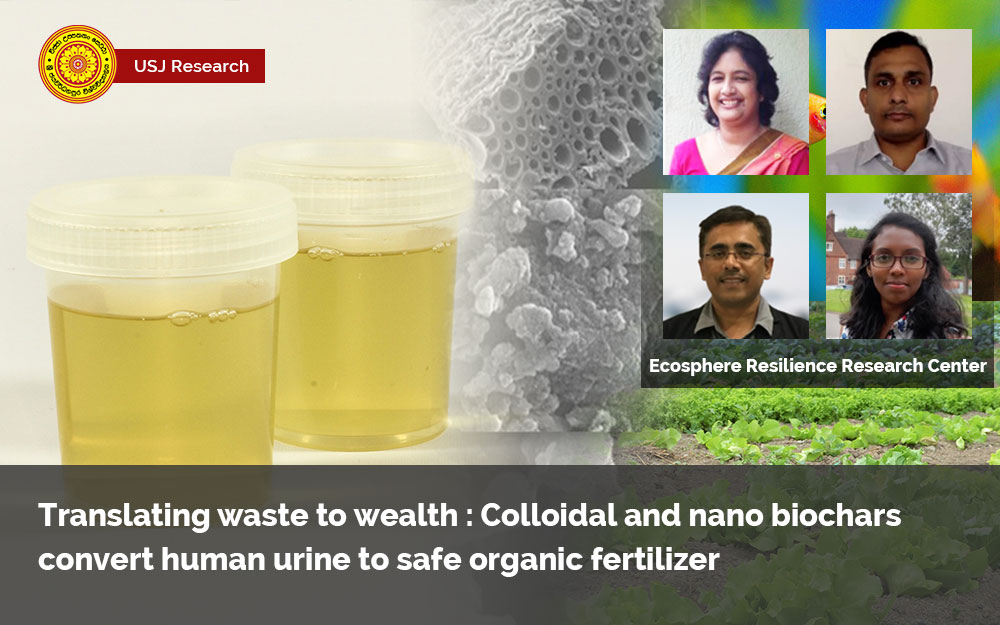 Ecosphere Resilience Research Center of the USJ breaks new ground for biochar research in many ways. The latest is mechanically ground dendro biochar, a waste byproduct of the dendro power industry, to colloidal and nano sizes and their performance in treating antibiotics in the synthetic hydrolyzed urine, translating waste to wealth to produce safe organic fertilizer. The research team included Ms. Sammani Ramanayaka; Ecosphere Resilience Research Center, USJ, Manish Kumar; Discipline of Earth Sciences, Indian Institute of Technology, India,  Dr. Thusitha Etampawala; Department of Polymer Science, USJ, Prof.Meththika Vithanage; Ecosphere Resilience Research Center, USJ. Human urine is used as an organic fertilizer in various countries; however, it has not investigated the transport of antibiotics into soil matrix, producing antibiotic-resistant microbes in the soil. Tetracycline is a common antibiotic used for the treatment of human diseases. The research group tested the particle size effects of biochars (BC) for oxytetracycline (OTC) removal in synthetic human urine. Biochar from a biomass energy gasification plant was subjected to mechanical grinding resulting in colloidal (CBC) and nanobiochars (NBC) with an approximate particle size of <500 nm and <100 nm, respectively. The highest maximum adsorption capacity of 136.7 mg/g was reported for CBC, while BC reported a slightly low value (129.34 mg/g). Interestingly, NBC demonstrated a two-step adsorption process with two adsorption capacities (16.9 and 113.2 mg/g).

The adsorption performance of OTC onto all three types of biochars demonstrated high. Chemodynamic studies indicated that the removal of OTC  onto BC surface was governed by physisorption, while CBC depicted the involvement of hybrid processes. The desorption of OTC back to urine is extremely low and BC, CBC, and NBC depicted a strong retention capacity. Nevertheless, CBC biochar demonstrated the best performance in adsorptive removal of OTC and nutrients in hydrolyzed human urine and its capability towards wastewater treatment. As the removal of nutrients was low, the treated urine can be used as a safe fertilizer.

The obtained results widen the scope of biochar use for wastewater treatment, demonstrating CBC as a promising adsorbent for treating hydrolyzed human urine before application in agriculture or discharged into the environment. Nevertheless, limited desorption cycles, single adsorbent dosage and low yield of NBC are considered as limitations of this study. Removal of antibiotics from human urine using BC, CBC, and NBC can be further improved with simultaneous removal of a mixture of antibiotics which is possible to present in human urine. Furthermore, this study can be elaborate to assess the capacity of biochars from different feedstock materials, temperatures and also for modified biochars. The obtained results are possible to upgrade by conducting the same set of experiments with actual hydrolyzed human urine to confirm the applicability of BC, CBC, and NBC in future studies.

Highlights of the Study,