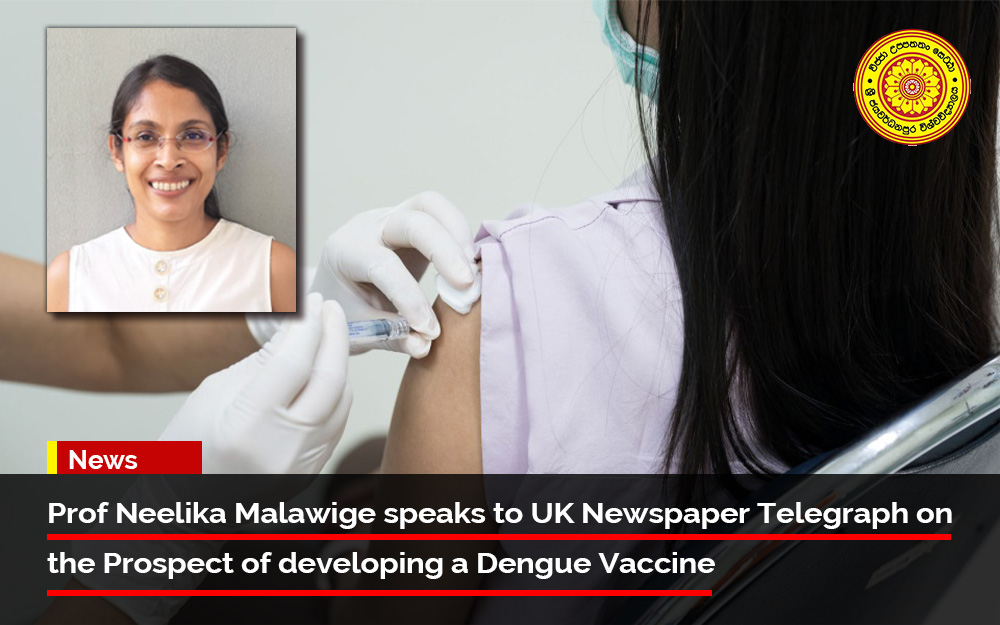 As two pandemic years pass by and an emerging surge of dengue with the increases of public mobility, the healthcare system could see a light at the end of the tunnel in fighting with dengue with the potential dengue vaccine. Prof Neelika Malavige – Head of Scientific Affairs and the dengue programme at the Drugs for Neglected Diseases initiative (DNDi) recently told “The Telegraph” (a prominent UK newspaper) that the new vaccine approach looks “promising”.

Unlike Coronavirus getting all the attention from the developed countries, Dengue virus got little less attention compared to the similar impact it made on the communities and countries with regards to hospitalization rates. Despite the lack of attention and investment on developing a vaccine during the past, a new vaccine is in the line to give potential relief to the healthcare sector in endemic countries. The Telegraph highlighted Prof Malavige’s statement “The sort of rates of hospitalisation Britain saw with delta, with omicron – we see that on a seasonal basis with dengue. Our hospital systems are completely overwhelmed and sometimes we have to restrict access during the dengue season, which coincides with monsoon season. This is why we need investment in tools to combat the virus.” To highlight the need for more investments on developing vaccines against Dengue, faster.

The Telegraph reported, Last month, Indonesia became the first country in the world to approve Qdenga vaccine, developed by the Japanese pharmaceutical company Takeda, for use in six to 45 year olds. In clinical trials, the shot (also called TAK-003) was found to be 84 per cent effective at preventing hospitalization four and a half years after a primary course of two doses, and 61 per cent effective against symptomatic disease. The vaccine is yet to receive pre-qualification status from the World Health Organization (WHO), but the data is under review by the European Medicines Agency and other dengue-endemic countries. Dr Sutee Yoksan, a Professor Emeritus at the Center for Vaccine Development at Mahidol University in Thailand, whose research is behind the vaccine mentioned the uniqueness of TAK-003 (Takeda Vaccine) vaccine, which uses DENV2 (Dengue variation 2) as its backbone with genes from the remaining 3 strains added creates a broader protection without amplifying the risk of more severe illness if someone catches the virus post-vaccination.

Sanofi- the first Dengue vaccine WHO approved in 2015 to combat dengue, increased the risk of severe dengue and hospitalisation among those who had never previously been infected by the virus, which was found by the company from its data in 2017. This led the usage of Sanofi vaccine only to the people who previously caught the disease according to the updated WHO guidance. “It’s tricky to test whether you’ve previously had dengue, so in reality, the Sanofi vaccine is rarely used now. Takeda seems to have learned lessons from Sanofi’s experience… it does look promising.” Prof Malavige said to The Telegraph in the interview.

Further Prof Malavie told The Telegraph, “So given these factors, the Takeda vaccine might have a better outlook, but there is some evidence of waning of immunity with time, especially to some dengue virus serotypes. So, we can’t completely rule out people developing severe diseases following vaccination.”

The Telegraph reported that the dengue vaccine developer, Takeda said it will continue to monitor data over time. The vaccine is the company’s first to be licensed outside of Japan and could generate up to $1.6 billion in annual sales. Gary Dubin, president of the company’s vaccine business unit, also said to The Telegraph “Takeda is working to have Qdenga available in Indonesia in early 2023, targeting the private market first to ensure it is available as soon as possible”.

Given the facts, it’s been just a matter of time and some dollars for Sri Lanka to have the new promising Dengue vaccine available for the Sri Lankan community to fight against Dengue. With or without availability of the Dengue vaccine, we will have to clean up our surroundings to control the spread of blood sucking mosquitoes and diseases including dengue.