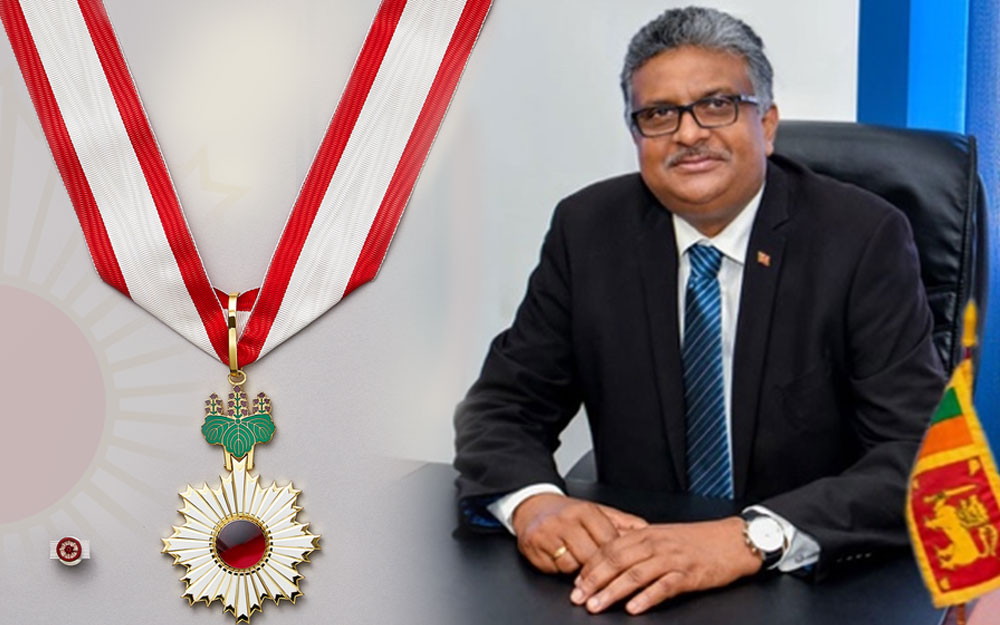 The Japanese government made public the recipients of “The Order of the Rising Sun”, conferred by His Majesty the Emperor of Japan on foreign nationals who have made distinguished contributions to enhancing friendly relations with Japan.

Snr. Prof. Sampath Amaratunge, Chairman of the University Grants Commission Sri Lanka was awarded the Order of the Rising Sun (旭日章, Kyokujitsu-shō) by the Government of Japan on the 29th of April 2021. The award was conferred to Snr. Prof. Amaratunge in recognition of his outstanding contribution to international relations, his commitment to promoting the Japanese Culture in the international arena and last but not least his advancement in research in the field of Rural development.

Snr. Prof. Sampath Amaratunge has long been an advocate to the Japanese Culture having lived many of his crucial years in Japan completing his further Education. Having gained his MSc. in Economics of Rural Development from Saga National University and PhD from Kagoshima University in Japan, Snr. Prof. Amaratunge has always maintained an intimate relationship with the country.

The Order of the Rising Sun is a national decoration awarded by the Japanese Government which was created in 1875. The award is conferred to those who have made distinguished achievements in international relations, promotion of Japanese culture, advancements in their field, development in welfare or preservation of the environment. The award is known to be the third most renown order conferred in Japan but the highest ordinarily conferred order which was originally conferred to Japanese nationals. However, from 1981 the order was extended to foreign nationals of exceptional stature and service.

Snr. Prof. Sampath Amaratunge’s commitment, persistence and dedication over the decades of association with Japan have promoted academic exchanges between the two countries to a new height. Having completed his higher education in Japan and proficient in Japanese, Snr. Prof. Amaratunge, during his tenure as the Vice Chancellor of the University of Sri Jayewardenepura founded the Faculty of Technology, which, through close collaboration with numerous universities in Japan, have contributed to advancing technological and scientific studies at the University. The partnership with the National Institute of Advanced Industrial Science in Japan have also promoted the university’s technical competencies in the relevant areas.

Snr. Prof. Amaratunge is currently one of the most renown members in the Sri Lankan Higher Education with an extensive service record. Prior to his current role as the Chairman of the University Grants Commission, Prof. Amaratunge held the position of Vice-Chancellor for over 5 years at the University of Sri Jayewardenepura.  An authority in Rural Economic Development, Snr. Prof. Amaratunge has won several awards including the prestigious Research Excellence Award (2002) of the Kyushu Society of Rural Economics, Japan. He has over 75 refereed publications to his credit, both locally and internationally.

USJ Congratulates Snr. Prof. Sampath Amaratunge for receiving “The Order of the Rising Sun” award of the Emperor of Japan and the University of Sri Jayewardenepura wishes him all the best for all his future endeavors.