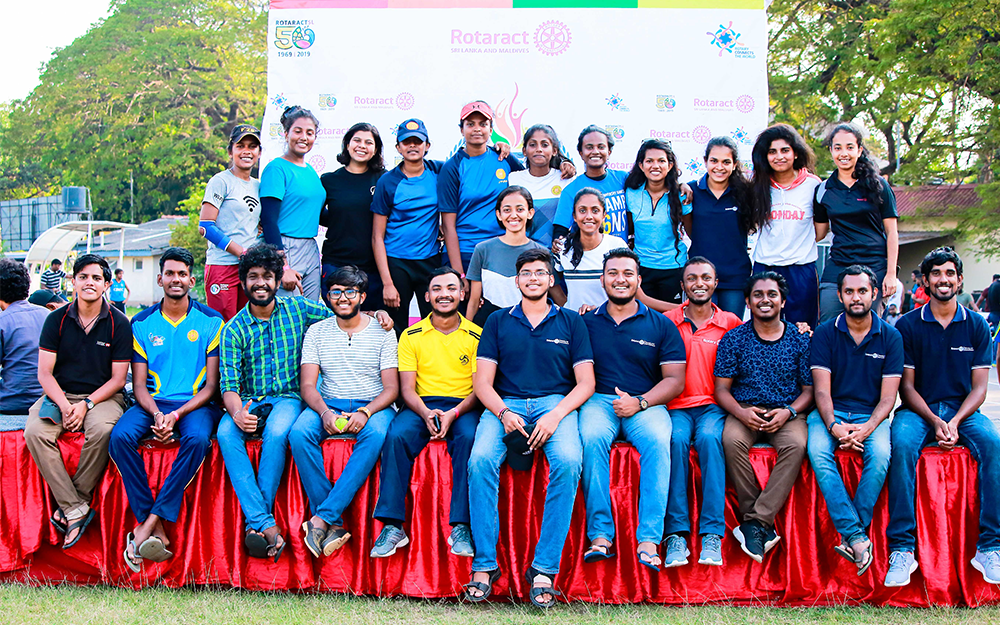 Rotaract Champions League 2020, the 6th proud installment of RCL history which was organized by the Rotaract District 3220 Sri Lanka and Maldives was successfully unveiled with the true spirit of sportsmanship on the 11th, 18th and 19th of January 2020.

More than 1500 passionate and skilled rotaractors from 70+ Rotaract clubs all over Sri Lanka showcased their talents in this annual sports encounter while enjoying the true spirit of sportsmanship and making lifelong friendships.

The 1st Day of RCL 2020 was held at the University of Colombo Grounds. The morning session started off with the opening ceremony where the District Directors for Sports and Recreational Activities, Rtr. Ravindu Jayakody and Rtr. Oshani Singapuliarachchi marked the commencement of RCL 2020 by lighting the Olympic torch. The opening ceremony was concluded with the exchange of equipment of each sport between the host clubs.

The athletic meet started off with the women’s 1500m event which was followed by the men’s event.  The 100m, 200m, 400m, 4x100m relay and Shot Put events under both men and women categories took place respectively where our very own Rotaractors of RACUSJ emerged victorious in almost all the events.

“Tug of War” was the most anticipated event of the day jointly hosted by the Rotaract Clubs of University of Sri Jayewardenepura and Kandy. Rotaract Club of General Sir John Kothalawala Defence University emerged Champions of both Men and Women categories.

The 2nd day of this sports encounter was mainly focused on Indoor sports. Badminton, Table Tennis and Futsal matches were held at the Royal College Sports Complex and Sports World Peliyagoda respectively while Carrom and Chess matches were held at Royal College Union Skills Centre. Once again, the Rotaract Club of University of Sri Jayewardenepura managed to secure the Futsal Women’s, Table Tennis and Chess Championships on the 2nd Day.

The last and the most awaited day of RCL 2020 was held at University of Colombo Grounds with the participation of 500+ Rotaractors. It was all about team spirit and team sports. Cricket, Tag Rugby and Basketball matches were scheduled to take place throughout the day. Rotaractors were very excited to cheer for their respective clubs despite the blazing hot weather. After a battle of sweat, tears, dedication and team work the Rotaract Club of Sir John Kothalawala Defence University emerged as Overall Champions of Rotaract Champions League 2020 with 1494 points while the Rotaract Club of University of Sri Jayewardenepura emerged Overall Runners-Up for the very first time in RCL history defying all barriers and hardships by securing 994 points.

Rotaractors of RACUSJ were able to secure the following victories at RCL 2020, while taking part in almost every event of the sporting extravaganza.

On behalf of the Rotaract Club of the University of Sri Jayewardenepura, we would like to extend our congratulations to everyone who participated in RCL 2020, and to all who won. We extend our heartfelt gratitude to the District Steering Committee of RID 3220 and host clubs of RCL, who made RCL 2020 a huge success.