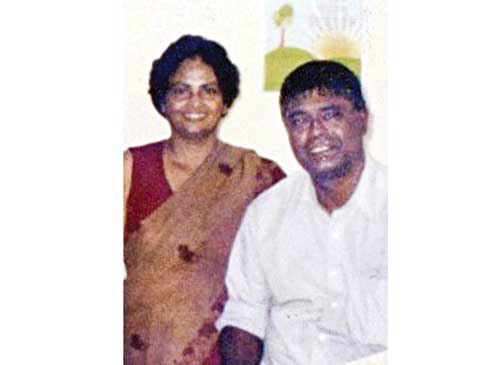 Orani Jansz who became one of the dynamic coordinators of the English teaching programme in the universities has passed away. This is an opportunity to review the lessons from that era, as the same problems still exist today. Orani was a first year chemistry student in 1962 at the University of Colombo, when she was also a batch mate of Raddy Jansz and others in the General Science Qualifying programme.

Orani Jansz was among those who were recruited to the ” English for all undergraduates” programme, launched in 1974. Diverse people, e.g., science graduates like Orani, and law students like Basil Fernando (now in Hong Kong) applying for teaching positions in the English project. Surprisingly, there were no “English Honours” applicants. Professor Gunawardena, the Head of the English Department was the enthusiastic live wire of the programme.

The “English for all undergraduates” was part of a curriculum overhaul (together with the introduction of course units etc.). The moment the programme was launched, the “progressive”, “Marxist”, as well as “Nationalist” student leaders, rose against it. At the time S. B. Dissanayake was the leader of the campus Communist party and was the dominant student leader. Dissanayake and Mahinda Wijesekera (student leader of the Science Faculty with JVP links) declared their complete opposition to it. This was said to be “an attack on students using the “Kaduwa”. The “Kaduwa” or “sword” was the nickname for English used by the student leaders who regarded it as a weapon used by the “Kultoor set”. They threatened to reply in kind to the “Kadu Haramba” unless we stopped the programme immediately.

Some of the “moderate” student leaders, e.g., the World University Services (WUS) representative Gajaba, as well as the main student union, presented a “compromise” proposal, namely, that we should teach Russian instead of a “colonial language” like English. Instead of rejecting that as being absurd and inappropriate, They had to agree to make immediate arrangements for holding Russian classes for those who wished to attend, while English will also continue. This was accepted by the student union. The Russian embassy was willing to provide a teacher, but not immediately.

However, a Russian lady living in Colombo has agreed to give a few lessons in the interim. The first lesson attracted a large number of students, no doubt corralled in by the student leaders. So the Russian class was held in the “arts hall” (called the “Lenin Hall” by the student leaders). After the first Russian lesson, there was a faster-than exponential decrease in numbers attending the subsequent classes. After about four classes there was no one turning up, and we terminated the teaching of Russian. Meanwhile the English department did a great job of developing a programme for teaching English to undergraduates who knew only their mother tongue.

It was the dedication of individuals, like Orani Jansz, that made the English Language programme a success. However the attempts to modify the curriculum was viewed with great suspicion and antipathy by the student leaders, as well as some of the older members of the teaching staff. Their struggle continued for over an year. The option to have a degree named “B. Dev.” to cover what I called “Development Studies”, that looked at curricula in terms of their potential for national development, was treated with great suspicion by the faculties, as many of the staff felt that they may have to “re-learn” new stuff. However, the student leaders were supportive of getting a B. Dev. Instead of a “BA” that was felt to have no “Thathvaya” (Prestige). The Daily News columnist “Viranga” wrote a piece on the obsession of the students on “Thathvaya”, quoting me, and we had to face a day of strikes!

At the time, the students were given a degree on the basis of one giant “final exam”, with no credit for, or taking account of course work. Continuous assessment of the pedagogic process required holding and grading exams periodically, and evaluation of course work All this was considered by the older staff as “extra work” for them. Many lecturers, especially in the Arts faculty, normally tuned up just in time for their lecture and promptly went home, and considered their job to be over. Student leaders who rarely attended lectures feared course evaluation and the possible expelling of students who do not attend lectures or practicals. Their opposition, channelled through the Head of one of the science departments, and using strikes and threats, was supported by Mr. Sumanadasa, the then Vice Chancellor who trembled with fear whenever the student leaders came to his office and dictated terms.

The vacillations and actions of the Vice Chancellor were detrimental to the line of authority in the campus that was needed to carry out necessary reforms. He ignored the transgressions of students at every level, including unacceptable levels of ragging. Staff members who had been assaulted by student leaders lacked backbone and withdrew their complaints under further threats from students. The campus president was to handle all threats without any recourse to the police! The growth of naked violence in the campuses, as well as the waste of public money, seemed to be of no interest to authorities even after the failed 1971 JVP uprising. While the Central Bank refused foreign exchange to buy vital spare parts for lab equipment, “cyclostyle” wax sheets, or books needed for the new programme, it readily approved plastic wrap for cigarette companies. Ananda Meegama, then at the Central Bank approved some money on a personal basis it was an unacceptable way of getting things done.

Political leaders were cheap enough to even undermine the university. For example, when trying to secure a much needed vehicle from a returning British diplomat; she was willing to just give it to the campus as a gift. Having got wind of it through a student leader, an influential MP claimed the vehicle for himself, because vehicle imports were banned in those days of “foreign exchange control”.

One has to look back to those times and say that individuals like Orani Jansz had to do their bit in an environment where campuses were in the grip of false ideologies. Unfortunately, things seem to have hardly changed today, given the horror stories of current campus raggings.