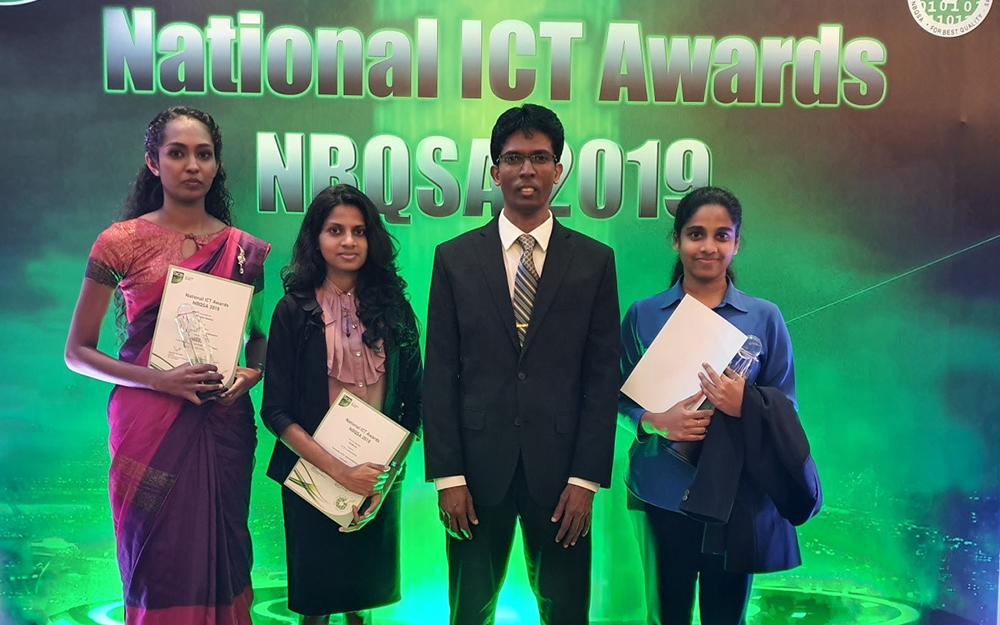 National ICT Awards (NBQSA) 2019 organized by The Chartered Institute for IT, British Computer Society (BCS) Sri Lanka section, was held on 11th October 2019 at Hotel Galadari. The University of Sri Jayewardenepura was able to bag a Silver Award and two Merit awards this year and one student was nominated for Asia Pacific ICT Alliance (APICTA) Awards 2019 which will be held in Vietnam, making it the second consecutive time that an undergraduate from Department of Computer Science, Faculty of Applied Sciences, University of Sri Jayewardenepura will be representing the University and Sri Lanka at APICTA.

It was Ms. Madhushi D. Welikala who won the Silver Award at NBQSA 2019 awards ceremony under the Tertiary Technology category and has been nominated to represent Sri Lanka at APICTA 2019 to be held in Vietnam. Her project titled “DiabMate” was supervised by Mr. M. D. R. Perera, a Senior Lecturer at the Department. “DiabMate” is a portable wearable device that collects Galvanic Skin Response (GSR) readings from the user’s fingers and calculates wearer’s real-time Blood Glucose Level using Machine Learning trained with a set of carefully chosen meta data. DiabMate Mobile Application facilitates wireless communication with the wearable and also provides a user-friendly and intuitive to help users stay ahead in the battle with diabetics.

Ms. Malshi Senevirathne and Mr. Mahesh Samarasinghe won a merit award at NBQSA 2019 awards ceremony under the Tertiary Technology category. Their project titled “BirdGuide” was supervised by Dr. P. Ravindra S. De Silva, a Senior Lecturer at the Department. “BirdGuide” is a mobile application to recognize and identify different kinds of bird species in Sri Lanka using the images which are captured by the user and provide a basic description of the species to the user.

Ms. WMKS Ilmini won a merit award at NBQSA 2019 awards ceremony under the Tertiary Postgraduate category. Her project titled “Personality Detector” was supervised by Dr. TGI Fernando, a Senior Lecturer at the Department. “Personality Detector” is a web-based application that is capable to assess the personality from the outer appearance of a person. Personality is defined using “Big-Five” personality schema, with five factors namely OCEAN (openness, conscientiousness, extraversion, agreeableness, and neuroticism). To assess the personality, the application used a convolutional neural network-based model with transfer learning. APICTA 2019 is scheduled to be held in Vietnam from 18th to 23rd November 2019, and we would like to wish our heartiest well wishes for Ms. Madhushi Welikala and her team to succeed and bring pride to the University and to Sri Lanka.